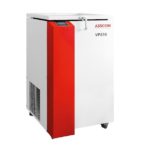 Vapor Phase Soldering, also well known as Condensation Soldering, uses for the heating-up process of the assemblies the thermal energy which is emitted by phase change of the heat transfer medium from gas-like to liquid state. This phase change (Condensation) at the complete surface of the solder piece lasts as long until the assembly has reached the temperature of the vapor. Due to the high vapor density and the liquid film as a result of condensation, the complete heating-up process takes place at an oxygen free environment. The transferred quantity of heat is linear to the supplied heating energy.

Following advantages are resulting with these physical principles: